Resuming Our Dive Into the PedoGate Abyss 4

Resuming Our Dive Into the PedoGate Abyss.

I use the term “PizzaGate” to refer to the aspects of the PedoGate category that are defined by the limits of James Alefantis and his absurd pizza shop, Comet Ping Pong and Pizza.

The greater issue, encompassing historical reports of systemic pedophilia which are chronicled in coming installments, properly belong to the umbrella category of PedoGate.

As you will see, PedoGate is real, it is indisputable, and it remains mysteriously dismissed as a phenomenon in modern culture and society.

As previously mentioned, a valuable introduction is the article DC PizzaGate: A Primer. I used the update dated 07/07/17, or 7 July, 2017. I will henceforth refer to it as The Primer.

This deep dive down the PedoGate abyss begins by scrutinizing the pedophile code language that pervades the Podesta emails. 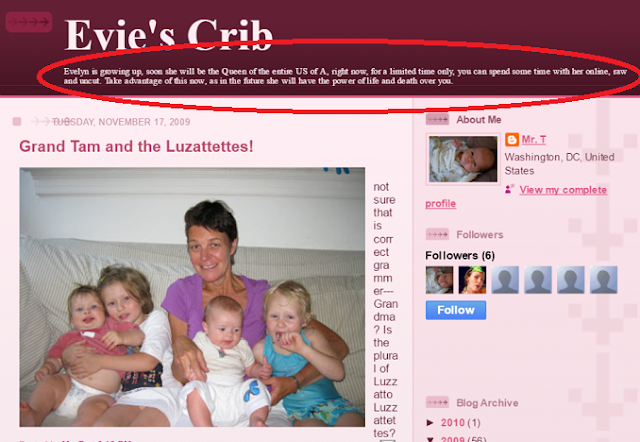 An examination of the website Evie’s Crib ensues, correctly pointing out that parents apparently traffic their own children. In this case, “Grand Tam Luzzatto” appears to offer her own grandchildren to pedophile voyeurs over the internet.

“Evelyn is growing up. Soon she will be the queen of the entire US of A. right now (sic), for a limited time only, you can spend some time with her online, raw and uncut. Take advantage of this now, as in the future she will have the power of life and death over you.”

The 12/12 update notes that Evie’s Crib has since been taken private, though the internet never forgets. An archived version is linked.

The videos Boys for Sale and An Open Secret are then linked by the Primer.

Then examples of the pedophile code are cited.

2. President Obama flies in $65,000 worth of pizzas and hot dogs from Chicago for a private White House event Wikileaks GIFiles ID 12230

3. “Do you think I’ll do better playing dominos on cheese than on pasta?” Wikileaks ID 30613

5. “Still in torture chamber” in an email with the subject line, “Last night was fun.” Wikileaks ID 56492

6. Pizza.jpg attached in email which solely reads “As John said, it doesn’t get any better than this”  Wikileaks ID 10037

Uninitiated readers will no doubt dismiss such examples, and this appears to be something that pedophiles bank on. They appear to conduct their business in plain sight, and they discuss pedophilia in a deniable fashion. 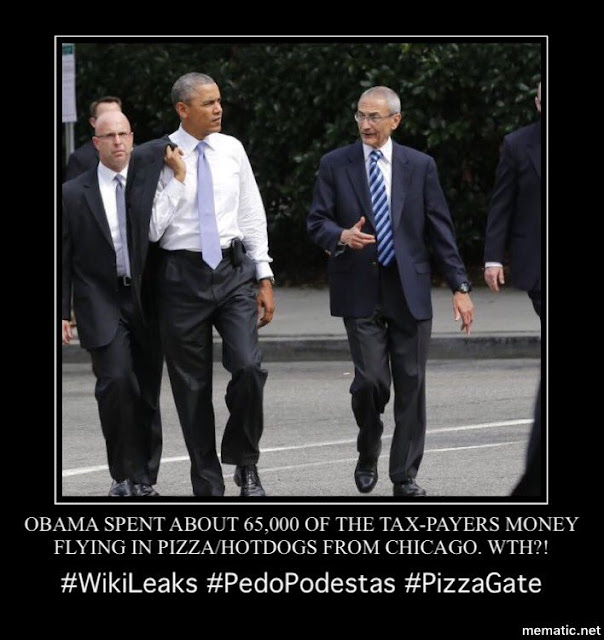 I cannot imagine any rational explanation for an email that states “Still in torture chamber.” This email in particular requires federal investigation and explanation.

Continue reading. You will soon understand that PizzaGate is real, PedoGate is real, and Western civilization, not to mention Islamic civilization, which would require a separate investigation, is infested with pedophilia to a degree that is staggering to realize.

The DC Pizzagate: A Primer article then notes that Besta Pizza is owned by former DOJ official Andrew Cline (Kline), who was assigned to the Human Trafficking unit.

Crowdsourced investigations correct this, noting that Andrew Kline with a K is a former official with the Human Trafficking Prosecution unit in the Civil Rights division at the DOJ. He apparently now works for Veritas Law, and is an Executive in Residence with the School of Public Affairs at the American University, and is the registered agent for Besta Pizza, among other entities.

At some point, a Vanity Fair article dated from 2011 noted that Andrew Kline, not Cline, was “one of four attorneys in the Human Trafficking Prosecution Unit of the Department of Justice, in the Civil Rights Division.” Then the article identifies Kline as “now a senior advisor in the executive office of the president.”

The Vanity Fair article in fact is an outlier, an exception, in that it attempts to contextualize the prostitution of underage American females. Its subject matter differs from the focus of this article, but it is an excellent article and I recommend that you read it.

Mr. Kline’s bio on the American University website corrects this characterization of his employment, noting that he was Counsel to the Vice President of the US, Chief of Staff in the White House Office of Intellectual Property Enforcement, and Counsel to then-Senator Biden on the Senate Judiciary Committee.

This is the first incidence of an aspect of the pedophile epidemic that you will see repeated throughout the following examples.

Pedophiles go where the meat is, and pedophiles gravitate to positions where they can influence pedophile investigations. The crowdsourced investigations on voat.co are agnostic on the question of whether Andrew Kline is himself a pedophile.

As a private attorney, however, acting as registered agent for multiple “pizza” restaurants, it is undebatable that he consorts with pedophiles, and he circulates in exalted social circles that harbor pedophiles.

My question is, why would Kline leave government employment? Is he paid so generously by pedophile clients?

Later, the Primer exposes Mr. Arun Rao, Chief, Southern Division of the US Attorney’s Office in Maryland for the DOJ. Mr. Rao is a frequent “liker” of photographs of toddlers, appearing in conjunction with James Alefantis on Instagram.

Predatory pedophiles also repeatedly show up in positions where they are in close proximity to their meat. The cases cited in coming installments are replete with examples where pedophiles are Little League baseball coaches, leaders in Boy Scouts and Girl Scouts, elementary school teachers, priests, pastors, investigators and bureaucrats in child protection agencies, and in positions throughout law enforcement.

Recent reports from Guam confirm that all altar boys staying at the Santa Teresita Church rectory were required to join the Boy Scouts. The Catholic Church in Guam, in fact, sponsored the Boy Scouts program.

Back to the Primer.

Returning to the Primer as a guide, the Primer addresses the problematic tastes in art of the Podesta brothers. Beginning with The Arch of Hysteria by Louise Bourgeois, readers are introduced to the problematic art of Katy Grannan, a photographer known for “documentary-style pictures of naked teenagers,” and the art of Biljana Djurdjevic.

The Primer opines, “Visit her website if you would like to have nightmares and suffer PTSD from paintings of kids laying face down in ponds.” 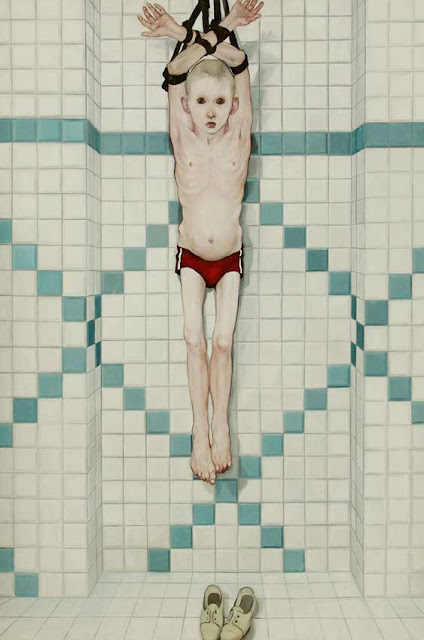 Then artist Kim Noble is introduced. Kim Noble is confirmed to be a victim of Satanic Ritual Abuse, and her work verifies it. Ms. Noble suffers from Multiple Personality Disorder, and some of her “alters” produce insanely disturbing work.

I post some of the most significant work by Ms. Nobel, particularly of her alter personality "Ria Pratt," whose artwork opened this article and illustrates it throughout.

Ms. Nobel's art is significant because it documents known pedophile behaviors. These are not "imaginary" works. They seem to eerily document incidents that actually occurred.

One element of pedophile conduct that Kim Noble illustrates is the use of handkerchiefs, referred to as “maps,” to collect semen and blood and other body fluids as grotesque memorabilia of abuse events.

Some pieces of Kim Noble art were used as band posters by Sasha Lord advertising acts that appeared at Comet Ping Pong and Pizza. On the right, the piece known as "Nowhere to Run" by the Ms. Kim Nobel alter named "Ria Pratt" illustrates the dissociation experienced by victims of child sexual abuse.

Then artist Marina Abramovic is introduced, and her invitations to the Podesta brothers to attend a “Spirit Cooking” event at her home. Alleged to be “Satanic” in nature, Spirit Cooking events, some of which are archived on YouTube, include ritual concoctions which mix blood, semen, urine, and breast milk. 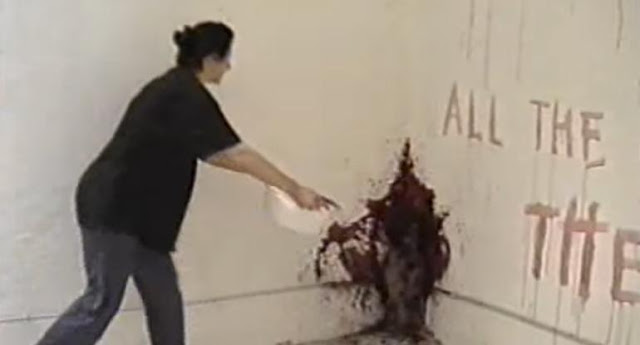 The Primer continues with examples from the Alefantis Instagram feed, which feed the disquiet of the reader. The Primer notes that many advertising posters are the work of Ms. Sasha Lord, who predictably is a “specialist with “at-risk” populations” and a “leader in Girl Scouts.” Why are we not surprised?

Yet again, pedophiles and their facilitators gravitate to where the meat is.

One example of a teacher who preyed on children is Mr. Jared Anderson, 28, honored as “teacher of the year” at Judson High School in Texas “just two months prior to his arrest in March 2016.”

“The victims, seven in all, said that during the parties, Anderson and the teens would engage in sex acts.”

Mr. Anderson pled guilty to four counts of sexual performance by a child and two counts of indecency with a child by exposure as part of a plea arrangement with prosecutors.

Local media reports that Mr. Anderson was also “a group leader at a local church.”

“All the victims were members of a church where Anderson served as a group leader.”

The consequences of Mr. Anderson’s parties echoed, as some 258 copies of the high school’s yearbook were distributed without an offending page featuring Mr. Anderson removed. Drilling in, school authorities later admitted, “We don’t know how many of the bad copies were sent out.”

Another teacher, Christian Tomsey, 39, committed suicide after he was fired from his job at Dominican High School in Whitefish Bay, WI after a graduate alleged an improper relationship in 2009.

Mr. Tomsey was arrested on charges of sexual assault of a student and crucially, possession of child pornography.

These are just isolated examples, and they illustrate a consequence of the policy of minimizing PedoGate: no comprehensive database categorizing different aspects of individual cases is known to exist. 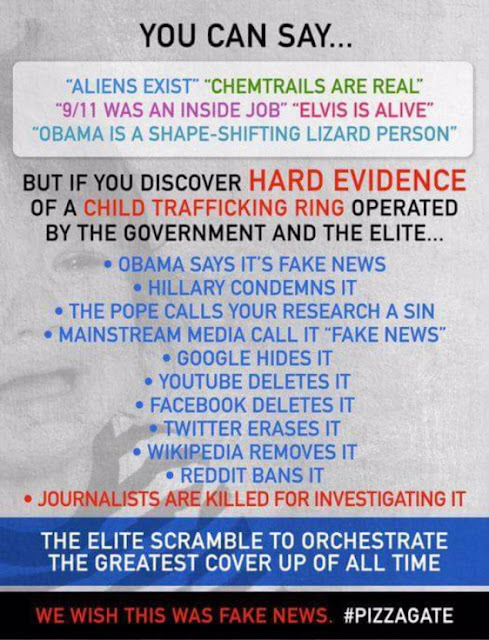 Following our deep dive down the PedoGate abyss verifies that these innumerable arrests, prosecutions and incarcerations demand a comprehensive database and most of all, that we attempt to understand the dimensions of the pedophilia epidemic.

As I will emphasize throughout this long article, pedophiles are predators, and like any other predator, pedophiles go where the meat is. Pedophiles gravitate toward positions where interaction with children is commonplace.

The pattern leaps out at us, to a degree where anyone in such positions must now be examined with a skeptical eye. We are at a point as a civilization where we must assume that people in such positions are not there because they simply love children. Too many times, such people end up loving children in unacceptable ways.

This is the fourth article in a long series. Stay buckled up, and stay tuned.
===

You can follow this series by watching my website at magickingdom.com or subscribing to my feed on Medium: https://medium.com/@estebantrujillodegutierrez.