Warren on the Fulcrum News Slack channel pointed me at this article, addressing the ongoing, orchestrated media campaign to normalize pedophilia.

It suddenly dawned on me that mainstream dinosaur media are complicit, as they suppress investigation and coverage of PedoGate.

Indeed, when they are not mocking PedoGate as a conspiracy theory, establishment media claims that PedoGate does not exist, they call it "fake news" without the slightest sense of irony, and media luminaries like Kelly Megyn, whatever the hell her name is, conduct sympathetic softball interviews with alleged pedophiles like the infamous James Alefantis of Comet Ping Pong and Pizza fame.

As this dive down the abyssal rabbit hole of systemic pedophilia illustrates, media suppression of the pedophile epidemic is a deliberate and purposeful policy. We see manifestations of this policy in the editorial lines of innumerable news sources.

The intent of this article is to irrefutably demonstrate that the pedophile epidemic can no longer be marginalized, and that we are, as a civilization, confronting an epidemic of child abuse of unknown yet vast dimensions that is yet to be acknowledged.

Our first step, inescapably, must be to describe the pedophile epidemic as an epidemic. Then we must acknowledge that it is a crisis. Then perhaps a comprehensive, definitive approach can be hazarded.

Subordinate agencies of the Department of Homeland Security are now the lead organizations investigating pedophilia, and the results of Operation Flicker and other investigations will be posted in subsequent dispatches.

After much consideration, I decided to include an overwhelming number of examples in this article, and then document them all with copious links. As of this writing, all links are good. I encountered a few 404’s in the course of writing this piece, and I worked around them.

We confront here a situation where the media actually publishes endless individual incidents of pedophilia, and yet fails to contextualize them.

It goes without saying that failing to use the dreaded term “epidemic” results in a systemic blindness. Addressed as isolated cases, over and over, incidents of pedophilia are rarely discussed as a phenomenon afflicting entire societies and cultures.

Most of all, failing to use the dreaded term “epidemic” means that comprehensive understanding of the pedophile phenomenon remains elusive, and we are consequently barred from demanding definitive, systematic, comprehensive solutions.

We all see it. Demands for a comprehensive approach are marginalized because pedophilia described as an epidemic is “fake news.” PedoGate is minimized. The article DC PizzaGate: A Primer, posts one list of dinosaur media outlets that abetted an unspoken policy to minimize PedoGate by publishing articles dismissing what they term “Pizzagate.”

Henceforth, I will simply refer to that indispensable article as the Primer.

The Primer makes no claim of comprehensiveness, and surely some dinosaur media outlets are inadvertently left off this list. But that is not the point.

The point is that there is a pervasive policy that encompasses all mainstream dinosaur media to suppress PedoGate to controllable dimensions, most reporting focuses on specific cases, and much of the best reporting on individual cases is in local media.

What I publish in this piece confirms that there is an effective policy that limits PedoGate reporting and avoids any admission that pedophilia is systemic, and most of all, no dinosaur media will claim that pedophilia is epidemic.

Here are many of the culprits who are complicit in what we can now call The Great Pedophilia Coverup.


In fairness, many of these outlets also publish reports that confirm to some degree the existence of the great pedophile epidemic, like ZeroHedge.

I will link to innumerable examples below that refer to the epidemic, and yet never name it as an epidemic. As we all see, terms like “PizzaGate” and most of all “PedoGate” are often used to dismiss the phenomenon.

In the same way that the term “fake news” boomeranged on its originators, so must PedoGate become an accepted term to describe the dimensions of an epidemic which defies definition.

Those of us who have been “red pilled” now perceive the hypocrisy of the de facto establishment media editorial line. We now use terms like “fake news” and “PedoGate” in our own ways. This must become normalized, as if we cannot name our affliction, how can we hope to begin?

But first things first. Such outlets in practice define “PizzaGate” in a false fashion, setting up a straw man, claiming that it is a theory accusing Hillary Clinton of sacrificing infants in the basement beneath Comet Ping Pong and Pizza.

One favorite point of PizzaGate debunkers is that there is no basement beneath Comet Ping Pong and Pizza. And yet, James Alefantis himself referred to such a basement in an interview with Metro Weekly, saying that his restaurant “harvests(s) a whole crop of organic tomatoes—10 tons of tomatoes every year. Can them all, store them in the basement, have like a harvest party when it gets loaded in.”

Apparently Mr. Alefantis was speaking allegorically. Nonetheless, no Pizzagate researchers, much less PedoGate researchers, are insisting that there is indeed a basement beneath Comet Ping Pong and Pizza. Nor do we insist that Madame Clinton herself sacrifices infants there.

Another favored point of PizzaGate debunkers is the strange incident of Edgar Maddison Welch, a failed actor who visited Comet Ping Pong and Pizza armed with an AR15, firing a magic bullet that miraculously destroyed a hard drive in a computer on the premises. 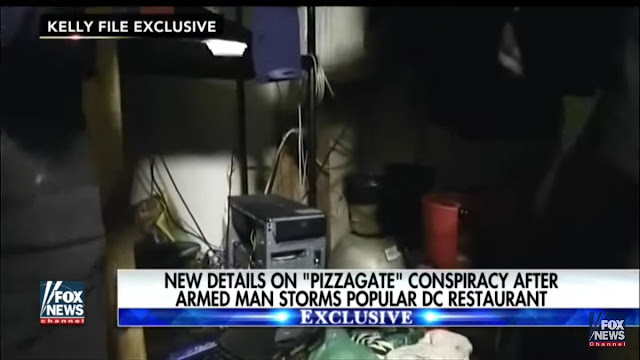 A police report filed with the Superior Court for the District of Columbia, Criminal Division, in the case United States v. Edgar M. Welch, states “S-1 (suspect or subject 1, referring to Welch) fired rounds (plural) from the rifle taking effect in the walls, one door and computer desktop.”

PizzaGate researchers observe that police responded to the report of an armed man at Comet Pizza in record time, arriving “two to three minutes after the gunman entered the restaurant.” The police response reeks of a set up. But a set up by whom?

Was Edgar Maddison Welch, the actor, playing a role? For whom? Who hired him? Mr. Welch was sentenced to 4 years in federal prison in June, 2017.

Pesky researchers note that “Somebody moved the street camera which originally faced Comet Pizza so that it’s mostly blocked by a pole when viewed online through the city’s site.”

Who moved that street camera? Who positioned it so that it is mostly blocked by a pole? The entire situation reeks of a set up.

Following the tweet, readers are now confronted with this:

The Primer then observes that the establishment media immediately began tweeting about the “dangerous consequences” of “fake news.” Surely the Welch incident was organized in advance precisely to frame renewed establishment media debunking of “PizzaGate.”

We perceive the existence of a conspiracy to marginalize and contain our understanding of the epidemic of pedophilia. But who are the conspirators?

We reject this definition of PizzaGate, it is obviously not what we claim, but by defining PizzaGate in this spurious fashion the establishment media can legitimately debunk it, and then claim that the entire PedoGate thesis is itself debunked.

The Primer poses the following questions which establishment media must address before resuming their campaign to debunk PizzaGate.

Another aspect which is rarely addressed in detail is the emerging realization that such investigations are too often thwarted, diverted, or limited. In fact, there seems to be a hard ceiling against which investigators cannot penetrate, and law enforcement is awash in examples.

One of the whoppers shared by Detective Rothstein is that former Secretary of Defense William Cohen, a former Republican Senator appointed by Democrat President William Jefferson Clinton, was an alleged pedophile who was appointed by Clinton precisely because he was controllable.

Another interview with former NYPD Detective Rothstein confides that one of his sources was the infamous McCarthy Committee counsel Mr. Roy Cohn.

“During this sit-down, Cohn admitted to Rothstein that he was part of a rather elaborate sexual blackmail operation that compromised politicians with child prostitutes.”

Rothstein also interviewed former CIA officer Frank Sturgis, infamous as a double agent planted on Fidel Castro during the Cuban Revolution, conspirator in the assassination of President John F. Kennedy, and Watergate burglar. Watergate may not have been all that our history books tell us. It was more.

“…Sturgis revealed one of the reasons for breaking into the Watergate. According to Sturgis, there was a “Pedophile Book” hidden away at the Democratic National Committee headquarters…..The book was supposed to have a list of pedophiles on the American political scene.”

History tells us that G. Gordon Liddy was the manager of the CREEP (Committee to Reelect the President) team of CIA connected Cubans that got busted burgling the Watergate.

A solution must be found. Before we can encompass that whopper goal, we must first ourselves better understand the dimensions of the problem.
====

Links in order of presentation.

This article is the first in a long series. Buckle up.

Thank you, friend! I needed that!