Defenders of Pedophilia: The FMSF, NAMBLA, and the Catholic Church.

The Satanic Panic and endless reports of pedophilia in the press inspired the emergence of an organization dedicated to debunking occult or Satanic elements in pedophile reporting.

In practice, this organization also disputes the existence of a pedophile epidemic, and functions as a partisan advocate for pedophiles themselves.

The False Memories Syndrome Foundation also provides expert witnesses who testify in court cases, and it is no coincidence that many of its members are themselves confirmed and admitted pedophiles.

Based in Philadelphia, the Foundation is a core resource that pedophiles and their facilitators employ to disrupt any consensus that there is a pedophile epidemic.

In 1997, The Columbia Journalism Review observed, “Rarely has such a strange and little-understood organization had such a profound effect on media coverage of such a controversial matter. The foundation is an aggressive, well-financed PR machine adept at manipulating the press, harassing its critics, and mobilizing a diverse army of psychiatrists, outspoken academics, expert defense witnesses, litigious lawyers, Freud bashers, critics of psychotherapy, and devastated parents.”

The Review continued, “With a budget of $750,000 a year from members and outside supporters, the foundation’s reach far exceeds its actual membership of about 3,000.”

Then The Review drops the hammer: “the press knows less than it realizes about who they are, what drives them, or why they’ve been so successful.”

The Review reports that the Foundation’s “own survey of member families indicated that 11 percent had been accused by more than one child (of pedophilia) and that, of a smaller sample that took a lie-detector test, 14 percent failed and another 11 percent declined to disclose the results.”

This organization does not just defend pedophiles and the pedophile agenda. It consists of pedophiles. The False Memories Syndrome Foundation is a pedophile organization akin to NAMBLA, or the North American Man-Boy Love Association.

Then The Review exposes verified pedophiles who are involved with the Foundation.

Toronto Star journalist Michele Landsberg “described how a foundation scientific adviser, Harold Merskey, had testified that a woman accusing a doctor of sexual abuse in a civil case might in fact have been suffering from false memory syndrome. But the accused doctor had previously confessed to criminal charges of abusing her.”

In other words, a Foundation adviser attempted to muddy the waters in a case where an accused doctor confessed to pedophilia.

Ms. Landsberg exposed others involved with the Foundation. “She noted that one founding advisor, Ralph Underwager, was forced to resign from the foundation’s board after he and his wife, Hollida Wakefield, who remains an adviser, gave an interview to a Dutch pedophilia magazine in which he was quoted as describing pedophilia as “an acceptable expression of God’s will for love.”

PAIDIKA: Is choosing paedophilia for you a responsible choice for the individuals?

RALPH UNDERWAGER: Certainly it is responsible. What I have been struck by as I have come to know more about and understand people who choose paedophilia is that they let themselves be too much defined by other people. That is usually an essentially negative definition. Paedophiles spend a lot of time and energy defending their choice. I don't think that a paedophile needs to do that. Paedophiles can boldly and courageously affirm what they choose. They can say that what they want is to find the best way to love. I am also a theologian and as a theologian, I believe it is God's will that there be closeness and intimacy, unity of the flesh, between people. A paedophile can say: "This closeness is possible for me within the choices that I've made."

“Paedophiles are too defensive. They go around saying, "You people out there are saying that what I choose is bad, that it's no good. You're putting me in prison, you're doing all these terrible things to me. I have to define my love as being in some way or other illicit." What I think is that paedophiles can make the assertion that the pursuit of intimacy and love is what they choose. With boldness, they can say, "I believe this is in fact part of God's will." They have the right to make these statements for themselves as personal choices. Now whether or not they can persuade other people they are right is another matter (laughs).”

The Love that Dare Not Speak Its Name
The "Love that dare not speak its name" in this century is such a great affection of an elder for a younger man as there was between David and Jonathan, such as Plato made the very basis of his philosophy, and such as you find in the sonnets of Michelangelo and Shakespeare. It is that deep, spiritual affection that is as pure as it is perfect. It dictates and pervades great works of art like those of Shakespeare and Michelangelo, and those two letters of mine, such as they are. It is in this century misunderstood, so much misunderstood that it may be described as the "Love that dare not speak its name," and on account of it I am placed where I am now. It is beautiful, it is fine, it is the noblest form of affection. There is nothing unnatural about it. It is intellectual, and it repeatedly exists between an elder and a younger man, when the elder man has intellect, and the younger man has all the joy, hope and glamour of life before him. That it should be so, the world does not understand. The world mocks at it and sometimes puts one in the pillory for it.

It goes without saying that clerical child molesters and their advocates in the Catholic Church also insist that child sex abuse is an expression of “God’s will for love.” These people are monsters.

“Landsberg also wrote that another adviser, James Randi, a magician known as “The Amazing Randi,” had been involved in a lawsuit in which his opponent introduced a tape of sexually explicit telephone conversations Randi had with teenage boys.”

The persistence of such pedophile apologetics was illustrated by the comments of the Archbishop of Melbourne, Denis Hart, who confessed that he would rather go to prison than report clerical child molestation.

In testimony before the Australian Royal Commission into Institutional Responses to Child Sexual Abuse, Archbishop Hart insisted that child molestation was “a spiritual encounter with God through the priest,” and that canon law was “of a higher order” than criminal law.

Incredibly, in Australia “clergy are not legally obliged to report crimes to the police and disciplinary proceedings for criminal activity by members of the Catholic Church are handled internally by Canon Law, which operates independently of the regular legal procedure.”

Yes, pedophile priests are in practice protected by the Catholic Church in Australia, and obviously in other countries.

The Commission determined that the Catholic Church in Australia is using “confessional confidentiality” as a pretext not to report child molestation to secular authorities.

The cagey Archbishop Hart then alleged, “Outside of this, all offenses against children must be reported to the authorities, and we are absolutely committed to doing so.” But not when child molestation is exposed in the confessional.

When priests and victims reveal pedophilia in the confessional, the Catholic Church in Australia insists that it must remain inviolate, above and outside secular law.

Archbishop Hart replied, “I believe that this is an absolute sacrosanct communication of a higher order.” 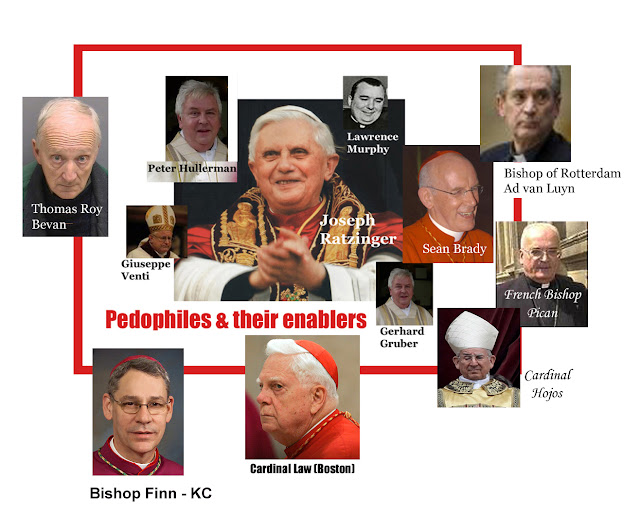 Child molestation revealed in the confessional, whether by child molesting priests or by child victims, is outside of secular law, and hence a protected category of information which must be concealed from authorities.

Critics immediately argued, “I think it’s about time the Catholic Church was dragged out of the dark ages.” This was a lawyer named Vivian Walker, who represents child sex abuse victims. She insisted, “We can no longer think about sexual offending against children as some kind of forgivable sin.”

The Archbishop of Brisbane, Mark Coleridge, and Father Frank Brennan, a priest who is also a lawyer, both said that they would “conscientiously refuse to comply with the law” if it required reporting child molestation to the police.

Father Brennan, a Jesuit who is also the CEO of Catholic Services Australia, tap-danced, writing in an opinion piece in August 2017, “Some … have suspected that the Catholic practice of confession has contributed to abuse and coverup. I don’t think it has, and that’s why I will continue to honour the seal of the confessional.”

Then Father Brennan explains himself, lamely alibiing, “Very few Catholics frequent the sacrament of confession often, if at all, nowadays.” Then he asserts, “The seal of the confessional applies strictly to the sins confessed by the penitent. It does not apply to information given to the priests about the sins or actions of someone other than the penitent.”

“Those who advocate the abolition of the seal of the confessional have a mistaken understanding of how confession is actually practiced in the Catholic Church.”

“If the law is changed, abolishing the seal of the confessional, I will conscientiously refuse to comply with the law because in good faith I will be able to claim that it is a bad law which does nothing to protect children and which may take away the one possibility that a sex offender will repent and turn himself in, making the world that little bit safer for vulnerable children.”

The Australian Catholic Church released data in 2017 confirming that 7% of priests in Australia between 1950 and 2009 were accused of child molestation.

Some 4,444 separate child sex abuse incidents were recorded in a survey, which was conducted by the Catholic Church of Australia itself, and there are strong indicators that the survey’s findings are untrustworthy and understated.

The survey did state that 90% of the victims were young boys, with an average age of 11 and a half. Girls were victimized at a younger age, the survey states, at age 10 and a half.

An article in ABC compares this rate of clerical pedophilia with that in America, which stated that 5.6% of the priests ministering to their congregations committed child sex crimes between 1950 and 2015.

Incredibly, this survey only includes cases where victims sought redress or compensation, where the church itself investigated and substantiated the claim. Cases that did not trigger any follow up or investigation are omitted.

This article reserves its most sickening caveat for the final two sentences:

“The survey sought responses from 75 authorities but only shows results for 26 of those authorities. Any authority with fewer than 20 claims of abuse has been left out.”

Any authority with fewer than 20 claims of abuse was left out.

Another article states that more than 20% of the members of some Catholic religious orders were involved in child molestation, an incredible statement, as it alleges that some orders were infested with pedophiles.

Nearly 2,000 priests, religious brothers and sisters and employees were identified as alleged perpetrators. Drilling into the data, some 572 child molesters were priests.

Implicated religious orders were the Marist Brothers, Salesians of the Don Bosco, and Christian Brothers, with more than 20% of them alleged to be pedophiles.

The Brothers of Saint John of God were a pedophile order, with 40.4% of them alleged to be pedophiles.

We are confronting here a veritable culture of child molestation.

The Royal Commission into Institutional Responses to Child Sex Abuse in Australia has a website. It is replete with case studies, 57 of them, as of March, 2017.
=

This is my 15th installment on the pedophilia epidemic.

Read dispatches 1-14 and forthcoming segments at magickingdomdispatch.com, or on Medium: https://medium.com/@estebantrujillodegutierrez.