Why Audit the Fed?

This is why we want to Audit the Federal Reserve.

When the American people finally understand what the Fed does under its regime of utter invulnerability, its exemption from oversight, its abuse of its statutory "independence," then we will demand the revocation of the Federal Reserve Act of 1913 and the replacement of the Fed with a national central bank that actually serves the people, and not an elitist cabal of grotesquely wealthy, private citizens who are shareholders, and incidentally owners of the largest and most influential private banks.

The Fed is a private central bank, a bank of banks. The Fed is an American corporation that issues debt instruments known as Federal Reserve Notes. We the people pay that debt, we pay the interest on the national debt, and it just keeps on compounding, growing and growing. It never decreases in amount. It just keeps on growing larger and larger.

We long ago passed the point of no return. It is impossible, at this point, to pay the national debt down, calls by politicians to reduce the national debt are distractions, as they understand very well that we can never pay off the national debt. The truth is, we were never even intended to do so.

The point of the national debt was to siphon funds from the American people in the form of interest payments in perpetuity. A central bank that actually served the interests of we, the people, would not issue debt securities at all. It would simply issue currency. 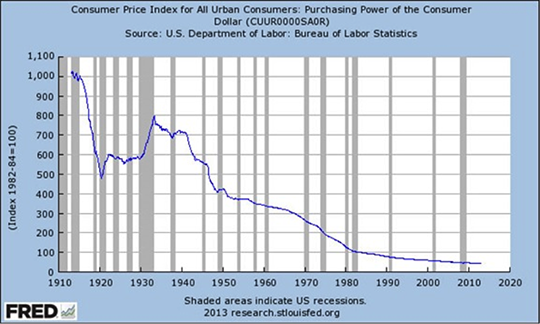 When you look at the value trajectory of the $USD, you see that it is on a long, unending trend line where its value forever decreases. Some call this inflation. I call it theft. This theft is in addition to the annual payments that we make on the interest owed to the Federal Reserve.

Some of us can remember a time when an egg cost a few cents. Not anymore.

End the Fed. The Fed is thievery. The Fed is parasitical. The Fed serves private bankers, not we, the people.

A national central bank should serve the people. Not private bankers.
at June 10, 2017