And then Senator Larry “Wide Stance” Craig (R-ID) resigned after his arrest at Minneapolis-St. Paul International Airport on June 11, 2007 by an undercover officer investigating recurrent complaints of sexual misconduct in the toilets there.

On August 8, 2007 Senator Craig pled guilty to misdemeanor disorderly conduct. His 10 day sentence was stayed, but he received a year of unsupervised probation and paid more than $500 in fines and fees.

In October, 2006, 8 months before his arrest, Senator "Wide Stance" Craig was implicated in sexual trysts with gay men in a public toilet in Union Station in Washington, DC.

Senator Larry “Wide Stance” Craig announced his resignation from the Senate on September 1, 2007 at the old Boise Depot train station. No one asked him “how are the bathrooms?” there.

The Idaho Statesman in December, 2007 published accounts by several gay men who alleged that Craig engaged in gay sex with them or hit on them.

“The likelihood of a person harboring secret desires to engage in sexual and / or romantic activities with members of the same sex is directly proportional to the frequency and volume of said person’s vocalized objections to homosexuality.”

“At 1216 hours, Craig tapped his right foot. I recognized this as a signal used by persons wishing to engage in lewd conduct. Craig tapped his toes several times and moves his foot closer to my foot.”

“I moved my foot up and down slowly. While this was occurring … The presence of others did not seem to deter Craig as he moved his right foot so that it touched the side of my left foot which was within my stall area.”

“Craig then proceeded to swipe his hand under the stall divider several times.”

The undercover officer then held his police ID down by the floor so that Craig could see it.

During an interview after his arrest, Senator Craig infamously stated “that he has a wide stance when going to the bathroom and that his foot may have touched mine.”

Senator Craig will henceforth be known in perpetuity as Disgraced Senator “Wide Stance” Larry Craig. The public toilet at Minneapolis-St. Paul International Airport is infamous, and a tourist destination in its own right.

The term “Wide Stance” entered the public lexicon, along with “toe-tapper.”

In 2015, the book by Henry Vinson, Confessions of a DC Madam: The Politics of Sex, Lies, and Blackmail was published, alleging that Senator Larry “Wide Stance” Craig was a “frequent flier of my escort service.”

It is important to remember that former Senator Larry Craig is an alleged pedophile, implicated in the Congressman Mark Foley Congressional Page Scandal, he is not a self-admitted pedophile nor a convicted pedophile.

For every hapless homosexual seeking sexual gratification in a public toilet, we have a convicted, confirmed, confessed child rapist like former Penn State coach Jerry Sandusky.

And still, the establishment media insists that PedoGate is a conspiracy theory.
= 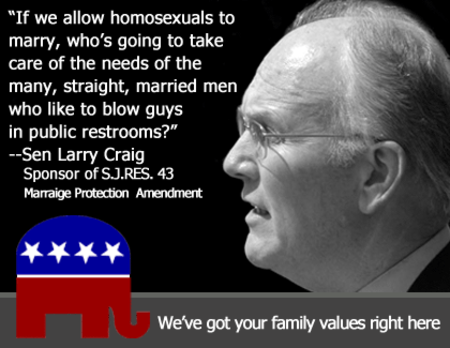 This is my 22d installment on the pedophilia epidemic.

Read dispatches 1-21 and forthcoming segments at magickingdomdispatch.com, or on Medium: https://medium.com/@estebantrujillodegutierrez.

O'Reilly's no spin zone placed a D next to Craig's photo when covering this story- what a puke.