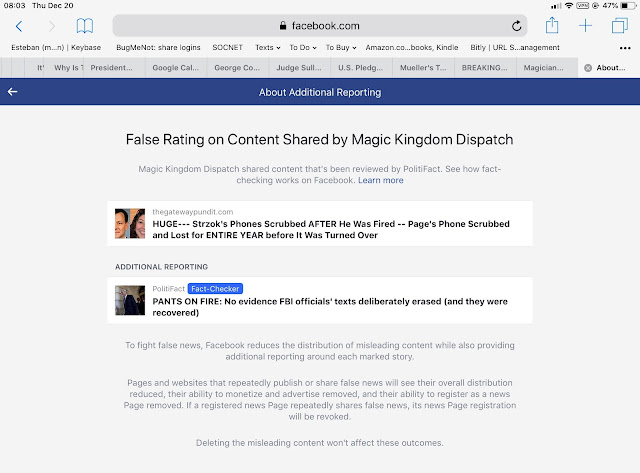 On December 20, 2018, the overlords of Facebook decreed that a link from a website that we posted was "fake news."

No, I am not making this up.

PolitiFact counters news reporting that annoys the neoliberal mandarins of social media. Any news espousing a pro-MAGA bias is anathema to the overlords of Facebook.

The mandarins of social media, our Facebook overlords, reject economic nationalism: they repudiate any America First worldview and dismiss us as xenophobic, nativist and racist.

I myself am a disabled and decorated Latino veteran and an expat. I live in Bangkok. So much for the identity politics of neoliberalism.

We editors of Magic Kingdom Dispatch make no apologies for our prioritization of Americans and America. We are unrepentant economic nationalists, our government must take care of Americans first.

Every American city is blighted by homeless citizens. Veterans are homeless. Many Americans go to bed hungry every day. This is unacceptable. In America we enjoy surpluses and wealth that could care for every American citizen.

Our problem is one of prioritization, incompetence, greed and distribution.

Many reading these words have been subjected to time-outs by the overlords of Facebook. I myself was blocked from posting because I expressed opinions about illegal immigration.

I will be satisfied when America  enjoys a Wall that rivals the Great Wall of China on our Southern border. A Wall that is visible with the naked eye from Earth orbit, a Wall that will outlast our Republic, and become a perplexing historical artifact after our civilization recedes into dust.

We editors of Magic Kingdom Dispatch on Facebook long ago realized that Facebook suppressed the organic growth and reach of our page: www.fb.com/magickingdomdispatch.

Whomever controls the predominate narrative rules the world.

We will not be ruled.

We will not obey.

We will not comply.

When Facebook issued the decree at the top of this page, we acted.

Brother Dave created our news and commentary page on Spreely.com:

We consequently transitioned all posting from Facebook to Spreely. We will speak our minds, we will curate news links that Facebook censors, and we will comment without fear of shadowbanning.

We will not be suppressed.

To read the forbidden news and commentary that is banned on Facebook, we invite you to join us there.

May God save the Republic.