After leveling off for a short time, Bitcoin resumed its inevitable rise. When you consider the structural factors behind Bitcoin, particularly Asian factors, you realize that Bitcoin is still undervalued, and it will continue to rise in price. 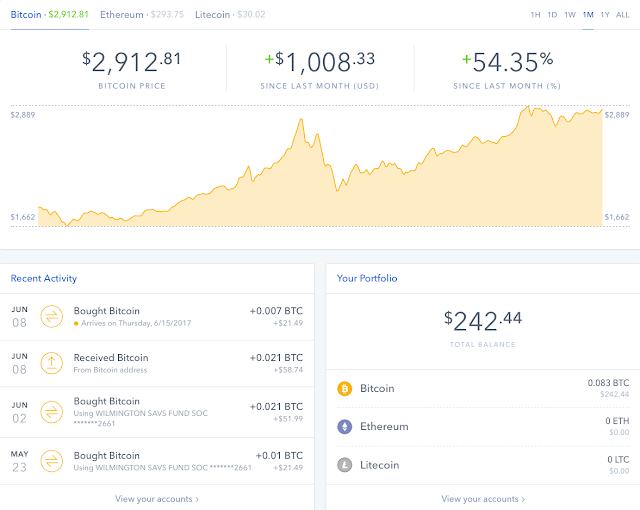 I think that the market was just catching its breath, and investors were realizing how much money that they made from Bitcoin. As you can see from the graphic above, Bitcoin increased in value since last month by some 54%.

As you can see, my own modest holdings amount to some $242.44 at the time of publication. I started with $115. I more than doubled my money since opening an account with Coinbase in April, 2017.

The question that plagues all Bitcoin investors is: what is the ceiling for Bitcoin? I will say what is in my gut. In time, Bitcoin will become a de facto global reserve currency, and it will supplant the petrodollar.

When chaos overwhelms the global ACH SWIFT network and the petrodollar is no longer honored for transactions, Bitcoin will be one of the only global networks still standing.

Bitcoin will be the most reliable global currency, the de facto safe haven asset, digital gold, and the demise of the antiquated national central banks, the World Bank, the IMF, the Bank for International Settlements, will be underway. They will not go quietly.

It is difficult to imagine this now, we would normally consider such events revolutionary, and I have no problem considering them that way.

All that we need to do to make this revolution is buy Bitcoin, and to use Bitcoin as a store of value, as a safe haven asset, as digital gold. With every transaction, we strike a blow against the dinosaur debt paradigm, we strike a blow against those small rectangles of intricately printed paper, those fiat currencies, backed by nothing more than human governments, which rise and fall.

Every $US dollar invested in Bitcoin is money denied to the antique central bank paradigm. When you put your money in Bitcoin, your money is pseudonymous, beyond banks, and your ownership of Bitcoin need not be associated with your identity.

No human entity can seize your Bitcoin, unless they control your Bitcoin addresses. You can back these up in hardware wallets, or anywhere that a long string of encrypted alphanumeric characters can be safeguarded, like in the cloud. You can encrypt them, then print them, and put them in a safe on a sheet of paper.

You must safeguard your Bitcoin addresses. Beginning with the un-spendable genesis block which was mined in January, 2009, vast quantities of early Bitcoin have not moved since the inception of the blockchain that same month.

Those Bitcoin owned by the creator of the technology, Satoshi Nakamoto, have not moved. An analysis of the Bitcoin transaction log reveals that Satoshi owns roughly a million Bitcoin, with a value today of more than $2.8 billion dollars.

Another scenario is that Satoshi is actually a front for a group that created Bitcoin and they are leaving early mined coins unspent to encourage confidence in the technology. All of these scenarios result in the same end state: those early Bitcoins have not moved. Nobody expects them to move.

Even if Satoshi miraculously materialized and liquidated his Bitcoin, the Bitcoin marketplace would absorb the transaction and continue functioning. The total $US dollar value of Bitcoin in the blockchain is now more than $47 billion dollars, and it is rising.

If anyone owns Bitcoin, it is we, the digital literati, we, the digital proletariat, we who use Bitcoin, we are the ones who own it. Bitcoin is distributed money, it is decentralized, and it is beyond anyone's or anything's ability to control.

Bitcoin is cheaper and faster than ACH SWIFT. Banks can fail. Nations can fall. Unless the internet itself goes dark, the blockchain cannot fail. Because Bitcoin is open source software, we know how many bitcoins can be mined. Precisely 3 bitcents shy of 21,000,000, or twenty one million.

We know the ceiling. At this point, we are not expected to hit the ceiling until the year 2140. Even then, the divisibility of Bitcoin out to eight decimal places means that existing coins will just increase in value, precisely like digital gold.

In the same way that all the gold ever mined can fit in a little more than three Olympic sized swimming pools, only a finite number of Bitcoin can be mined. Thus we experience scarcity, which is integral to the value of these assets, whether gold or Bitcoin.

Gold and silver are the assets that served as currencies and safe haven assets for the past 5,000 years. They occupy physical space, and they are not easily moved in bulk. But investors still purchase gold, mostly as a hedge against riskier investments, and as jewelry.

Enter Bitcoin, which is digital, digital gold, occupying no space. The Bitcoin that you can own and sell is literally a long sequence of alphanumerical characters, and it can be moved instantaneously.

Bitcoin's lone vulnerability is the fact that it relies on the internet. Without the internet, Bitcoin cannot exist.

No matter how you slice this, Bitcoin is revolutionary.

But revolutions do not necessarily need to be instantaneous, or sudden, or even violent.

For an example, all that we need to do is consider the internet. The net revolutionized communications, and it changed us, it changed mankind, in ways that we still barely understand. There is no question that the internet is revolutionary. Was it violent?

Obviously not. So not all revolutions have to be sudden, or violent. The internet really began, I remember the time clearly, in 1995. That was when all of us early adopters had CompuServe and AOL accounts, I was using them as early as 1993, and that was the internet for us.

It was the hackers who dialed into bulletin boards, and then there were services like The Well, that straddled the divide between the noobs and the geeks. The academics had ARPANET. The smart ones among us had USENET.

But that was 1995, and that was the beginning of the greatest development in the history of mankind, on a par with the harnessing of fire.

Bitcoin supplanting the global central bank paradigm and money itself will be a revolution of comparable dimensions. It need not be sudden, nor violent.

But it will happen. I see it coming.

I will call it now: Bitcoin's short term ceiling is $10,000. Laugh all that you like. I am hoarding my Bitcoin. When they hit ten grand, then I will consider selling. I will probably regret doing it. Bitcoin could be worth a million bucks apiece within the lifetimes of Millennials.

Too bad that I ignored the itch to get a few hundred bucks worth when they were $30 each...