The Insane Case of Carlos Danger 25

The Insane Case of Carlos Danger, aka Anthony Weiner.

It is difficult to know where to begin with disgraced former Congressman (D-NY) Anthony Weiner, who splashed back into public consciousness as a protagonist in the FBI’s coverup of Hillary Clinton’s mishandling of classified government emails on a private server that she unfathomably kept in a closet in her basement bathroom.

The political career of Carlos Danger began in 1985, when he was a Congressional aide to Representative Chuck Schumer (D-NY). After graduating from SUNY-Plattsburgh, Mr. Weiner remained on Representative Schumer’s staff until 1991.

In January 1992, Carlos Danger was elected to the New York City Council. The youngest member ever elected, he served as a Committeeman until 1998.

In September 1998, Congressman Schumer ran for the Senate. Carlos Danger ran for his vacant seat, and won by a scant 285 votes. In 2005, Mr. Danger unsuccessfully ran for the mayoralty of New York.

On May 27, 2011, a day that will echo in infamy, Mr. Danger inadvertently posts an image of his bulging crotch on his official Twitter account, apparently intending to send it privately to a young lady from Seattle.

On May 30, he tells reporters that “a hacker got control of his Twitter account.” He is quoted: “Look, this is a prank and not a terribly creative one.” He emphasizes that he was hacked.

CNN alleges that “Conservative blogger Andrew Breitbart is first to report the image, which shows the bulging crotch of a man in his underwear.”

Mr. Danger stuck to his guns for several days, telling CNN that he did not post the photo on June 1, 2011. He says that he has hired a law firm to investigate.

On June 6, 2011, Mr. Danger tearfully admits sending the photo and confesses that he engaged in “inappropriate communication” with unidentified women who are not his wife. Mr. Danger nonetheless declines to resign.

Mr. Breitbart also takes the podium at the Sheraton Hotel in New York where journalists were expecting Mr. Danger. “I’m here for vindication,” he said, as he was angry that he was “accused of being a hacker against a congressman.”

On June 11, 2011, Mr. Danger decides that he will ask for a “short leave of absence” from Congress in order to seek “treatment.”

On June 12, 2011, TMZ posts photos of Mr. Danger in various forms of undress, which he apparently took of himself in a locker room and then shared with unnamed others.

After pressure from Democrat Party politicos, Carlos Danger resigns from Congress on June 16, 2011.

In a July 2012 interview published in People, Mr. Danger claims that he has no immediate plans to run for public office again.

Simmering as a stay at home father for just a couple of years, on May 21, 2013 Mr. Danger announces his second bid for the mayor’s seat in New York City.

In a campaign video, Mr. Danger appeals for a second chance with voters.

“Look, I made some mistakes. And I know I let a lot of people down. But I’ve also learned some tough lessons.”

On July 23, 2013, TMZ publishes screen shots of sexual conversations that Mr. Danger had with women who were not his wife in 2012.

The same day, The Editorial Board of The New York Times publishes “Mr. Weiner and the Elusive Truth,” writing that “A website called The Dirty had another woman’s story, another round of sex texts, and another picture of Mr. Weiner’s penis.”

Again in July, 2016, disgraced former FBI director James Comey appeared before the House Oversight and Government Reform Committee and defended his decision not to refer Crooked Hillary for prosecution to the Department of Justice (DOJ).

On July 25, 2013, Anthony Weiner admits that he belongs to the alias “Carlos Danger,” and that Mr. Danger sent explicit tweets to as many as 10 women, including 3 women after he resigned from Congress in 2011.

Ms. Sydney Leathers, then 23, of Princeton, IN, alleged that Mr. Danger sent her nude photos and engaged in phone sex with her months after his resignation from Congress. Mr. Weiner’s campaign manager resigns in disgust in the aftermath.

Again retreating to his role as a stay at home dad, Mr. Weiner fades in public awareness until the documentary film Weiner premieres at Sundance, unforgettably chronicling the implosion of his 2013 mayoral campaign.

In late August of 2016, The New York Post broke the story that Mr. Danger was caught sexting with another woman. This time, articles are illustrated with his selfie of himself in his ever bulging underwear with his 4 year son beside him in bed.

Huma Abedin finally throws in the towel, issuing the statement:

“After long and painful consideration and work on my marriage, I have made the decision to separate from my husband. Anthony and I remain devoted to doing what is best for our son, who is the light of our life. During this difficult time, I ask for respect for our privacy.”

In September of 2016, federal and New York City law enforcement states that they are investigating illicit online interactions between Carlos Danger and a 15 year old girl, making Mr. Danger an alleged pedophile.

The next month, in October, 2016, disgraced former director of the FBI James Comey announces that the FBI is reviewing new emails that could be relevant to a previously closed investigation into Hillary Clinton’s missing emails.

The internet explodes with speculation that Crooked Hillary’s deleted yoga emails, famously subjected to “bleach bit” erasure beyond hope of recovery, may be among the supposed 650,000 emails in the Abedin / Weiner Outlook archive.

Reports are that the archive was in a folder labeled “Insurance.” Anonymous sources “close to the investigation” state that the emails turned up as investigators worked their way through the sexting messages of Carlos Danger.

Madame Clinton famously blamed disgraced former FBI Director James Comey as a critical factor in her epic defeat for the presidency at the hands of President Donald J. Trump.

Former Director Comey confided in a letter to several Congressional oversight committees that the FBI became aware of additional emails pertaining to a prior investigation into Madame Clinton.

The letter, inevitably, leaked. Eleven days prior to Election Day on November 8.

Then-candidate Trump stated, “Hillary set up an illegal server for the obvious purpose of shielding her illegal actions from public disclosure and exposure.”

The emails on Hillary’s bootleg server did not reside on the state.gov domain, which are automatically captured for preservation as government documents.

In fact, the secret of Hillary’s bathroom basement server unaccountably held throughout the Benghazi Hearings.

Though then-Director Comey characterized Madame Clinton’s mishandling of classified information as “extremely careless” in July 2016, and he recited a long litany of indisputable felonies and misdemeanors, he astoundingly recommended against criminally charging her.

“Federal officials said the timing of the director’s announcement…was not related to…last week’s disclosures about the unplanned meeting between Bill Clinton and (Attorney General Loretta) Lynch on the tarmac of Phoenix’s Sky Harbor Airport…Lynch said they discussed personal matters, not the investigation.”

Nobody believed that for a moment. In fact, TarmacGate blew up from the appearance of gross corruption, and sent shockwaves throughout the American zeitgeist.

This was not, in fact, Director Comey’s call. It is the purpose of the FBI to investigate and then refer completed investigations to the Department of Justice, which can then decide to convene a grand jury and seek indictments or not.

In October, 2016, however, FBI agents discovered those infamous 650,000 emails archived in an Outlook database on a spare laptop in the Weiner household.

Mrs. Abedin explained to federal investigators that it was difficult to print emails from the State Department’s email system so she routinely forwarded emails to her private accounts when she needed to print them out.

Madame Clinton famously can navigate an iPad, but she long preferred hard copies of emails. As printing was too complex an operation for her, she left it to her assistant Mrs. Abedin.

Mr. Weiner, now aged 53, represented neighborhoods in New York City in the House of Representatives for more than a decade, from 1999 to 2011. His marriage to Huma Abedin was officiated by former president William Jefferson Clinton, himself a serial sexual predator of some renown.

Never down for the count, Carlos Danger, I mean, Anthony Weiner, permitted filmmakers to videotape his run for office, and the result was the unforgettable film Weiner.

The best review of the movie comes from The New York Post, which gives itself deserved second billing for their horrible front pages.

Unimaginably, New York City voters forgave Anthony Weiner for past sins and he was leading in the polls when it emerged that he continued sexting with women, some underage, using the immortal alias “Carlos Danger.”

In the aftermath of his second public disgrace, Mr. Danger tried to remain in the public eye as a television commentator. His wife, Mrs. Human Abedin, focused on getting Hillary Clinton elected to the presidency, leaving their 4 year old son in the custody of Mr. Danger.

In August 2016 Mrs. Abedin stated that she was separating from Mr. Danger, after a photo of him lounging in his bed in his underwear was shared by one of his sexting partners. The Weiner 4 year old infant could be seen laying at his side.

One of Mr. Weiner’s sexting partners ended up being 15 years old, a legal minor from North Carolina, suddenly making Mr. Weiner a pedophile. The FBI seized electronic devices used by both Weiner and Mrs. Abedin. 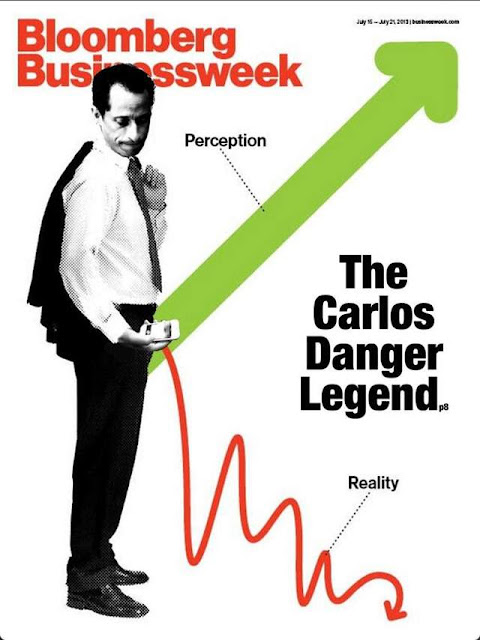 Now 53 years old, the convicted pedophile pled for probation because his peculiar form of mental illness involves sexting with women who are not his wife rather than a virulent fixation on underage girls.

This is my 25th installment on the pedophilia epidemic.

Read dispatches 1-24 and forthcoming segments at magickingdomdispatch.com, or on Medium: https://medium.com/@estebantrujillodegutierrez.