Will the Real Julian Assange Please Stand Up? 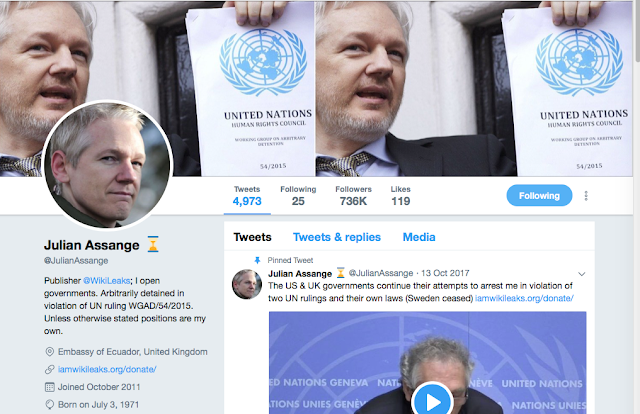 There are many "Julian Assange"​ @JulianAssange accounts on Twitter, but only one of them is the real Julian Assange​. You must be careful to ensure that you are reading the words of the genuine Assange, and not one of the multiple "parody" accounts that Twitter permits.

It is inexcusable that Twitter allows so many fake Assange accounts to proliferate, but their reasons are simple enough. Twitter is a private company, and it can do whatever the hell that it wants to do with its service. By mistreating Assange, Twitter also genuflects to governments worldwide that demonize Assange and WikiLeaks as a "non state hostile intelligence service." 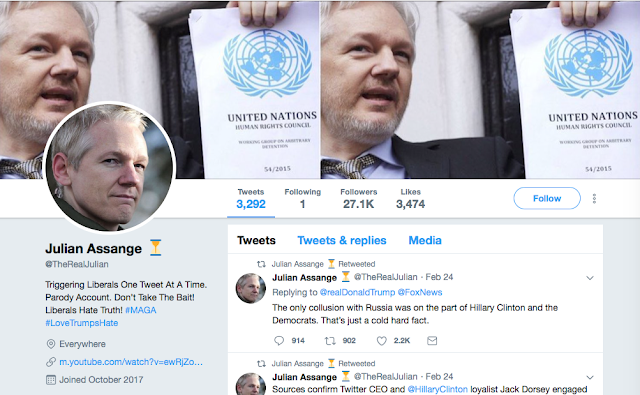 Splitting off undiscriminating users who follow fake Assange accounts enables controllers of those accounts to say anything and to attribute it to Assange, duping thousands of people. Deliberate confusion ensues. This is no mistake.

Finally, Twitter prevents the genuine Assange from accumulating Twitter followers, reducing his data footprint and blunting the reach of his words. Twitter does this often, "shadow banning," using a variety of schemes, in an effort to suppress speech that they disagree with.

Twitter's partisanship not only violates simple right and wrong, it is contrary to the spirit of the internet itself, which retains an increasingly embattled libertarian quality of permitting all perspectives to be stated, no matter how repugnant that they may be.

One simple example is Twitter's tolerance of Big Harvey Weinstein, surely among the most reviled figures of our time. Big Harvey retains his account. And he has a blue checkmark.

Twitter and YouTube primarily interfere with "alt-right" internet personalities like David Seaman (who quit Twitter entirely for a time, and just recently resumed tweeting after he was booted off YouTube), Lauren Southern (banned from Patreon), Mike Cernovich (a net media juggernaut banned from Medium), Alex Jones (another net juggernaut, host of InfoWars, on the verge of getting banned from YouTube despite millions of subscribers), his sartorial badness Roger Stone (lifetime ban from Twitter) and Jack Posobiec (banned from Medium).

Other so-called "alt-right" personalities suffer ideological discrimination on Twitter, like Milo Yiannopoulos​, who has nearly 2.5 million followers on Facebook. Twitter kicked Milo off its service entirely, claiming that he harassed a black actress. Milo did not merely harass her. He observed that she is a shitty actress, which she is, and she looks like a dude, which she does.

Milo's acolytes then unleashed a deluge of racism, misogyny, sexism and transphobia. I thought that that was what the internet was for, allowing a billion flowers to bloom, even the rankest. I am clearly mistaken.

I generally favor market solutions to market problems, and this harassment of Assange could be classified that way, but it is time for Twitter and YouTube and all social media leviathans to be subjected to FCC regulations, regulated like any other communications utility.

In the meantime, quit all Assange accounts that you follow on Twitter, and follow only @JulianAssange. You can also follow the various @WikiLeaks accounts (which is blue check marked, adding insult to injury)  but Assange maintains a personal account for logical reasons, and he should be able to do that without suffering such petty abuses from Twitter.

How many of us follow @realdonaldtrump? Our president maintains and tweets from his personal account, reserving @POTUS for official statements. Even presidents are entitled to hold personal views, and nobody can tell them that they cannot express them when they wish.

As an American, I think that everybody should be treated with the same respect that Twitter shows to President Trump. That would be egalitarian, and respectful of the free speech ideals that founded the internet.

We all see what happens when private firms try to legislate morality: they begin by withholding a blue checkmark, then they censor. Nobody designated Twitter the thought police.