Facebook's methods are transparent They pick us off, piecemeal, as each of us can say, "it sucks to be him, but nobody is bothering me." And we continue to live our lives. One by one, quietly, unnoticed, we are silenced.

Facebook can block me, but they cannot make me shut up about it. I will make their ban stick in their throat to the extent that I legally can.

==
Here is a cleaned up revision of the commentary that got me banned from Facebook:

"I am not surprised that this community, which voted Trump 2:1, is generous with the children of illegal aliens. They are Christians.

Our laws must be followed. Illegal aliens are criminals. They should do the responsible thing and do whatever will get them straight with the law, just as you or I would do.

They victimize their own children when they break the law.

Illegal immigration is not a human right. We should show mercy when possible, but illegal aliens have the option of migrating legally, just like everyone else. Nobody should expect to be rewarded for line cutting. Immigrate legally, or go back to your countries of origin.

Ankle monitors are a good solution. After a hearing, they should be expelled. What they do with their children, citizens or not, is up to them."

When Facebook bans us for speaking words like this, it imposes standards that it has no right to impose. It is true that Facebook is a private company, and they can categorize content on their service in any way that they like. They can ban anyone, and they can use any pretext whatsoever to do it. And they do.

These companies, these bastions of neoliberal orthodoxy, YouTube, Facebook, Twitter, all need to be broken up under antitrust laws. They are controlling too much discourse, and wielding too much unelected power. And they are discriminating against conservatives, suppressing conservative commentary.

I thank you for your support!

Here is a screen shot of my rebuttal to Facebook. 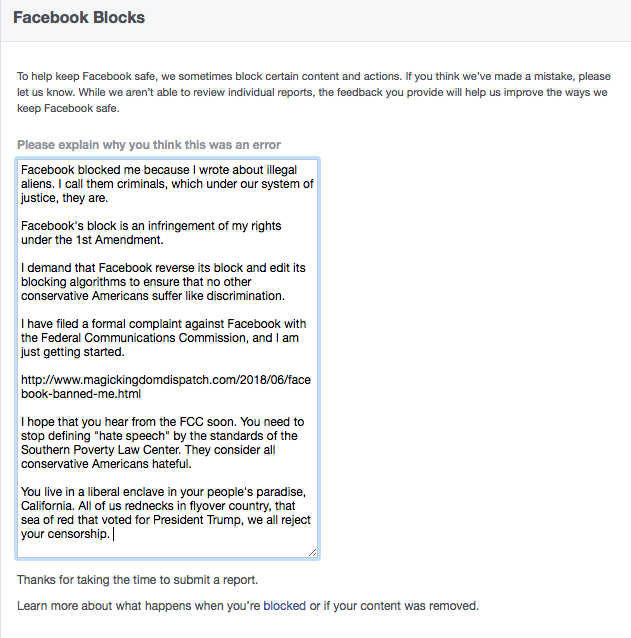 And here is Facebook's response, when I tried to submit my rebuttal.

Not in our America.

I filed a complaint with the FTC, the Federal Trade Commission. You can file your own complaint by clicking on the link below. 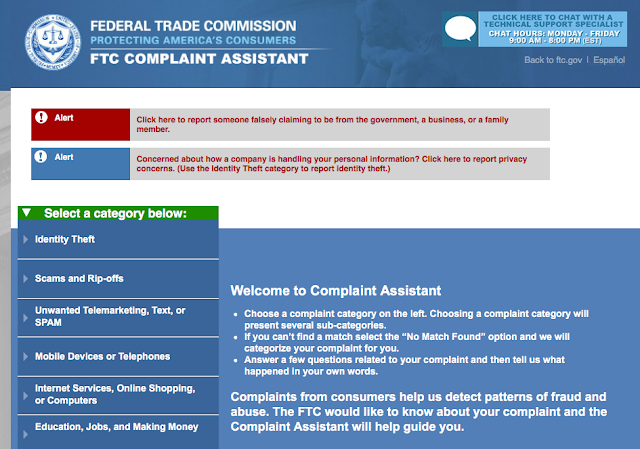 Here is the FTC's email confirming the receipt of my complaint, assigning it reference number 97134209.

And that is where this rests, for now. When I hear back from the FTC, I will update this page further.

If you have ideas to help push this complaint against Facebook further, please post them in the comments below.